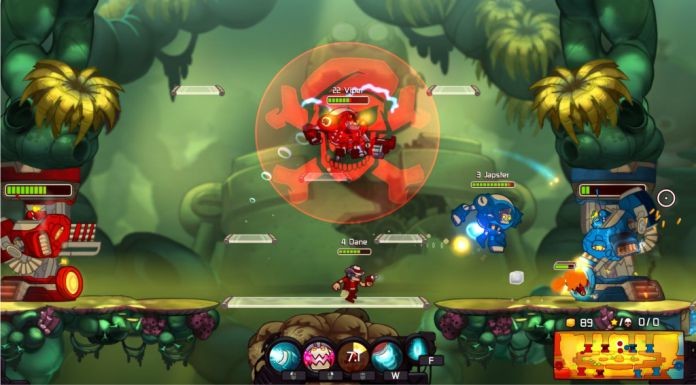 Awesomenauts is an online battle arena video game and played by many players at the same time. The game was developed by Ronimo Games and it was made public on May 2012 for Xbox and PlayStation while for PC it was released on 1st August 2012.

Nauts(Characters) in Awesomenauts
A player before started playing game gets several Nauts or characters in this game to choose from. Each of character possesses their common attack and two particular moves. Players of one team cannot select the same character twice; however, the same character can be selected by players of different teams. This game also offers costumes for the character which a player can get as game rewards or download it. Before started playing game, each team should have 3 players and if the slots of team are not filled with all the players then computer controlled players can be used. These computer-controlled users can be replaced by the players once they log in.

Gameplay in Awesomenauts
Awesomenauts offer split screen gameplay mode for 3 local players and a common map is available for all the three players. In this map players can see the distinctive layout of the levels of Awesomenauts as well as blue and red bases at opposing sides of map and three turrets on every side. However Awesomenauts is a multiplayer online battle video game but its gameplay components comes from fighting games and 2D platform.

In this battle match players are pitted into the arena and have aim to collect Solar that comes in their way. The Solar can be collected by killing the droids, players of enemy team and by destroying the turrets. If an individual player kills the enemy team’s player then he will get a big reward and experience. Also depending on the number of collected Solar, a team earns health points and goes level up.

Two Special Features of Awesomenauts
Awesomenauts offer two special features to their players. One is, players can get experience after each match that depends upon some factors like kill/death ratio, lost or won matches and other factors. In every experienced level, a player is allowed to get new arena Nauts together with perks which he selects for the character. Second one is, ranked servers are used to play most of the matches through which the performance of a player can be tracked. A league number is assigned to each of the player which is then used by matchmaking to make the matches online.